Havana speaks to the imagination. A city lost in time filled with music and mojitos, La Habana was always on my bucket list. Now that Cuba is finally starting to open up, I thought it would be the perfect time to go discover Havana’s dilapidated but oh so alluring streets, now filled with an unprecedented choice of paladares (privately owned restaurants) and casas particulares (room rentals in private homes).

There is plenty of choice for places to stay in Havana, besides the big hotels you can now also book casas particulares on Airbnb. We stayed at this great place on the border between Centro Habana and Vedado. The top floor apartment is tastefully furnished, spacious and clean and with an amazing view over the Malecon, with, as a very welcome bonus, a refreshing sea breeze. There are not many sights close by, but it’s strategically placed between Havana Vieja and Vedado and you’ll have the luck of driving over stunning Malecon every time you leave or come back!

Driving along the Malecon, Havana

On the roof terrace of our casa particular, Malecon Havana Centro

There are not many must see sights in Havana, it’s all about strolling around and taking in the atmosphere. This itinerary can help give you some ideas, but in Havana it’s all about improvisation! Strangely enough, considering the mid-day heat, most places open only around 10 a.m. Still, it is worth getting up early while it’s still fresh.

Start your first day in Havana in the old quarter of Habana Vieja. Grab a taxi and ask them to drop you off as close as possible to Plaza de la Catedral (cars can’t go into the old town). I tried to take as many different types of vintage car as possible, from the rickety collective taxis that you share with others, mostly Habaneros, going in the same direction, to freezing air-conditioned limos (only slightly less rickety). The only vehicle I don’t recommend are the rickshaw-like coco taxis, they have a meter but end up being much more expensive than any other type of transport.

Habana Vieja has four main squares. Start at the Plaza de la Catedral before continuing to nearby Castillo de la Real Fuerza (and its small but well-presented museum) and Plaza de Armas. From here, take any of the smaller streets, it is practically impossible to get lost and there are beautiful buildings all over. You will probably come across the other plazas as if by accident (do bring a map or download a google map for use offline, just in case). When on Plaza de San Francisco de Asis, check what concerts are held at the homonymous Basilica during your stay and get tickets if anything catches your interest.

From Plaza Vieja, the final square, it’s a straight line back towards Plaza de la Catedral. Here you can have a lunch of tasty ropa vieja (shredded beef in a spicy sauce) at Dona Eutimia (Callejón del Chorro No 60c, +535 2706433) followed by a look at the artworks at Taller Experimental de Grafica at the end of the alley. 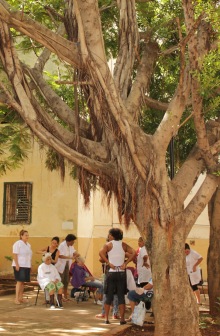 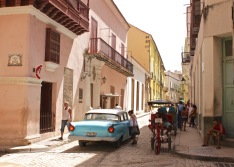 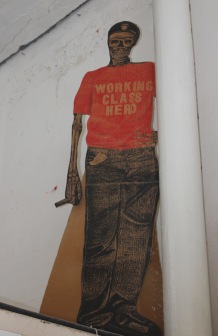 In the heat of the afternoon, seek refuge in air-conditioned El Floridita, a short walk away. This bar made famous by Hemingway is a bit of a tourist trap, but it looks like a movie set and the daiquiris are delicious.

Move on for a sunset drink on the roof terrace of Hotel Iberostar Parque Central, the views over Havana are amazing. Hotel Inglaterra, the Gran Teatro de la Habana and the Capitolio Nacional just on the other side of Parque Central all merit closer inspection. Inform at the Teatro for upcoming performances of the Cuban National Ballet. 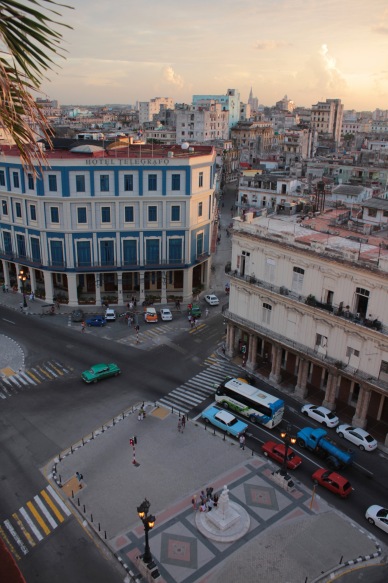 View from the rooftop terrace of Hotel Iberostar Parque Central, a great spot for a drink

Look up at Havana’s balconies to see everyday life

Opulence and ruins side by side in the center of Havana 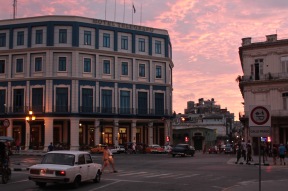 Afterwards, we had dinner at quirky paladar San Christobal (Calle San Rafael No 469, +537 8601705). The food here is more interesting than at most restaurants in Cuba, but it’s better to come to this country with low expectations. The lean years of the periodo especial have passed but Cuban cuisine, even at the top end, is still distinctly bland. The décor of San Christobal, however, is very charming. Air conditioning means it can get cold inside, so bring a light sweater or scarf. Reservations are essential.

The Malecon is a popular hang out spot in the evenings

Vedado with its tree-lined boulevards and mid-century mansions and hotels is worth exploring. Here too, you can just wander around (although the distances are bigger), or stick to these highlights.

In the morning, head over to Necropolis Cristobal Colon. This cemetery is one of the largest and most important in Latin America and is filled with elaborately sculpted memorials. Not much respite from the sun here!

Bring your own shade to the Necropolis Cristobal Colon

Head down la Rampa (Calle 23) towards Topoly for lunch (Calle 23 No 669, +537 8323224). This eclectic Iranian restaurant is housed in a villa with a pleasant veranda overlooking the garden. The food is a very welcome change.

Keep walking down la Rampa for Heladeria Coppelia, the main branch of Cuba’s national ice cream company. The ice cream itself is nothing special, but the UFO-like building is an institution and great for people watching. You will be directed to the tourist part where you pay in CUCs but if you have pesos you can easily ignore this and queue with the locals. 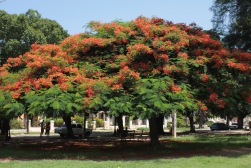 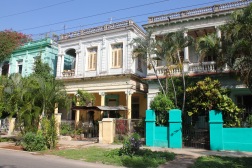 Finish the day with a romantic dinner at La Guarida in Centro Habana (Concordia No 418, +537 8669047). This was by far my favorite restaurant in Cuba, housed in a crumbling grand building with great rooftop terraces, and food that can live up to international standards. This is not a secret so reservations are essential. You might even want to go here twice!

Today, you can take it easy, or revisit some of your favorite spots. Be sure to go for a walk over Paseo de Marti (often called Prado) if you haven’t yet. On the border between Centro Habana and Habana Vieja, this boulevard is lined with beautiful buildings in various states of decay. 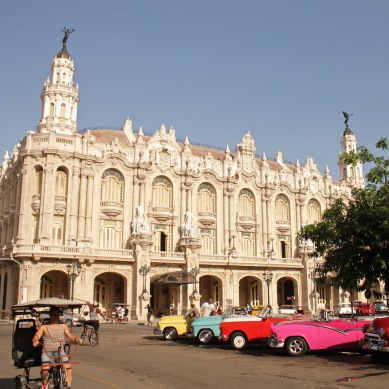 Familiar faces on a Vedado wall 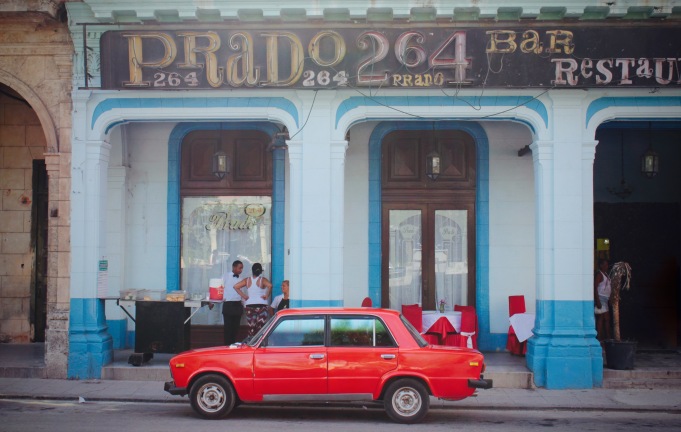 Go for a stroll along the Prado

Head back to Vedado for lunch at paladar Café Laurent (Calle M No 257, +537 8312090). Surprisingly located on the top floor of an ugly modern apartment building, it has great service, good views and they try very hard on the food, with mixed results.

From here, you can walk to Hotel Nacional for a lazy afternoon with drinks on the patio overlooking the sea. On a Sunday, check out the entrancing rumba music in Callejon de Hamel, starting early afternoon. Be ready for a hot mass of people, but the music is great!

Just breezing’ along the Malecon

In the evening, head to Miramar to hang out with hip Cubans and expats for dinner and drinks at arty Espacios (Calle 10 No 513, +537 2022921). From here it’s not far to the Fabrica de Arte Cubana, Havana’s hottest club. Check their website to see if any concerts or events are on.

If you want to see more of Cuba, but are not sure where to go and what to do, check out my day-to-day itinerary for a 3 week Cuba road trip!

Enjoying the sunrise from our roof terrace

One thought on “3 days in Havana”

Hi there! I’m Sofie, a Dutch model living between Paris and London, although I feel like I spend more time traveling all around the world!

On this blog I share my travel tips and itineraries, so get inspired!