As a former Dutch colony, Suriname is firmly on the Dutch tourist trail, but most other people have never even heard of the small South American country. That is a pity, because Suriname has a beautiful old capital, historical sights, lush greenery and a great mix of cultures (including indigenous, Dutch, African, Indonesian, Indian and Chinese). Be prepared to be addressed in Dutch, although almost everyone speaks good English, too. 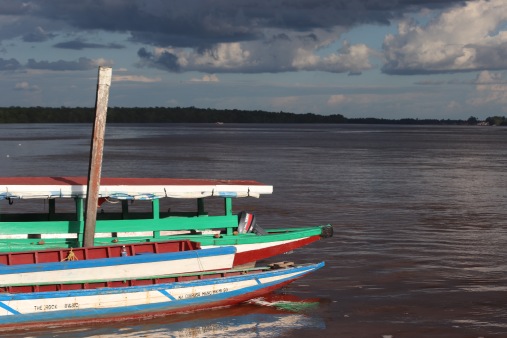 Boat tripping along the Commewijne river 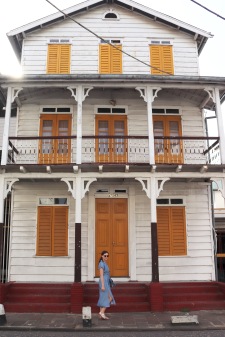 Discovering the historical center of Paramaribo

This 5 day travel itinerary only covers the capital, Paramaribo, and the nearby plantation area around the Commewijne river. Of course, once you’re in this corner of the world, a visit to the jungle is a must, and can be arranged with any tour operator in Suriname (there are few or no roads in the interior, so traveling on your own is pretty much impossible). We decided to go to the maybe even more pristine jungle in next door Guyana instead (on the blog very soon!!)

Day 1: arrival in Paramaribo, evening on the Waterkant

Upon arrival at Pengel airport, we hopped into a taxi to Paramaribo. The international airport, which used to be an American landing strip during WWII, is quite far from town and traffic can be bad, but just look out of your window and enjoy your first taste of the Surinamese countryside.

UNESCO listed houses along the Waterkant

After checking in to your hotel (see below), go straight for a stroll along the Waterkant (the Waterside) one of the prettiest and liveliest streets in Paramaribo. Head to Fort Zeelandia on the eastern end, passing by Onafhankelijkheidplein (Independence Square) and the presidential palace. Surrounded by lovely old houses, the place has a distinctly Dutch feel to it. The fortress dates from the 17th century and has had an eventful history, up until the controversial “December murders” of 1982. It now houses a restaurant, Baka Foto, with a terrace overlooking the Suriname river. The place is very atmospheric, but the food unfortunately disappointing. I recommend just having a drink here to enjoy the setting before heading to another historic building, De Waag, for dinner.

The Dutch feel of Fort Zeelandia

We spent a night at La Petite Maison, a beautiful old wooden building on the Waterkant. Our room was spacious with river view and AC (although the 80s decoration could do with some refreshment) but unfortunately very noisy at night: people play loud music just in front until very late. We were there on a holiday though, so other days might be better. You could also ask for a room on the back, but without the view the place is not that interesting.

The next day we changed for Greenheart Hotel, in a charming and quiet street a short walk from the center. The lovely wooden building, newly built by the owner in traditional style, has a small but pretty pool and pleasant sitting areas on breezy balconies. However, rooms are very small and bathrooms positively tiny, lacking a little in comfort for the price. Nonetheless, I think it’s one of the best options in Paramaribo. 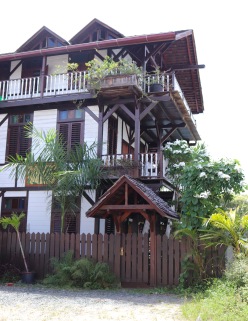 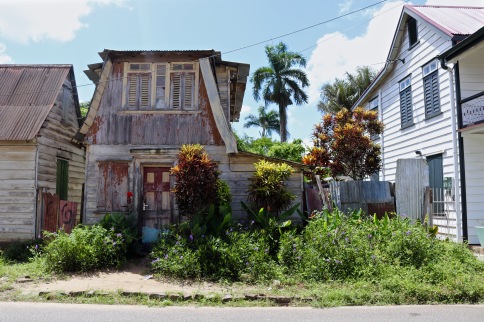 Jungle taking over the streets of Paramaribo

Get up early, before it gets too hot, and head to the central market. I always love wandering around exotic markets, admiring unfamiliar products and their sellers. Most interesting and atmospheric is the separate Vreedzaammarkt just beside the main market (also called the Maroon Market or Witch’s Market) where Maroon women sell medicinal herbs from Suriname’s jungle. The market is open Monday to Saturday (5-17h). If you happen to be in Paramaribo on a Sunday, consider taking a look at the bird song duels held early in the morning on the Onafhankelijkheidsplein instead. 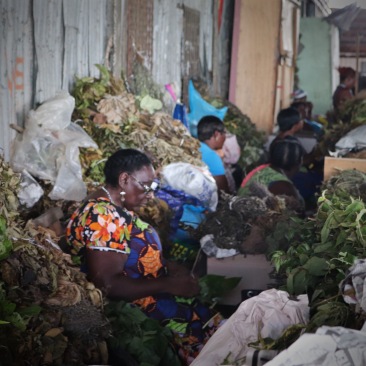 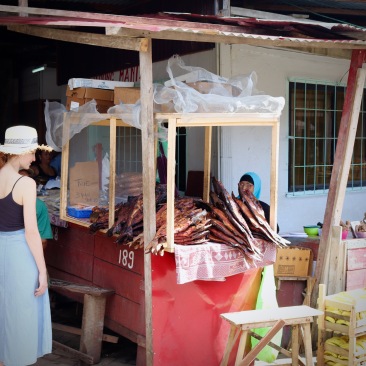 Dried fish at the market, yummy!

The Vreedzaammarkt and it’s mysterious wares

From the market, walk over to the Neve Shalom Synagogue on the Keizerstraat, a stately wooden building from 1837. Right next door is a large mosque, the Moskee Keizerstraat. A few minutes from here is the Centrumkerk, in the middle of Kerkplein. A simple but pretty building, it has been witness to the not-so-pretty colonial history of Suriname: Susanna du Plessis, a notoriously cruel female slave owner from the 18th century, was buried here. The house where she spent her final years is located a few minutes away, across the street from the presidential palace and still known as the Du Plessis House. It now accommodates government offices. 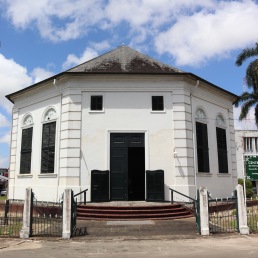 War monument along the Waterkant

Keeping the most impressive building for last, head over to the recently renovated Saint Peter and Paul Cathedral. Entirely made of wood, the church was built during the 1880s and is one of the largest wooden structures in the western hemisphere (together with Saint George’s Cathedral in Georgetown, Guyana). The striking interior is made of unpainted cedar wood. Shorts or short skirts are not permitted, bring a scarf to cover bare shoulders if necessary. 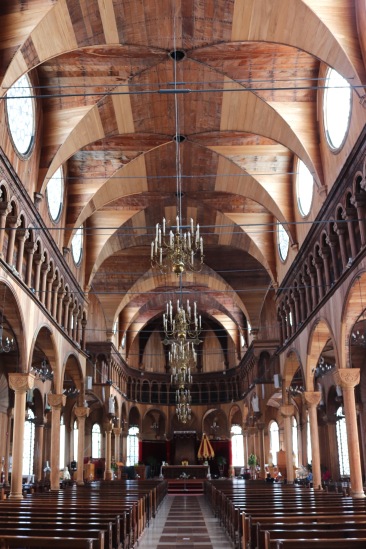 The cedar wood interior of the Saint Peter and Paul Cathedral

For lunch (or any other meal really) I highly recommend Souposo, practically in the same street as the Greenheart Hotel. They serve delicious soups, but also plenty of other dishes. Choose between the hip interior and a pleasant patio at the back. Afterwards, while away the hottest part of the day by the hotel pool or on one of the breezy balconies.

Late afternoon, go for a stroll around the Palmentuin (Palm Garden). When we were in Paramaribo it happened to be Indigenous Day and the Palmentuin was filled with partying people, but apparently the place can get a little dodgy, especially after dark, so be careful. Follow up with drinks and dinner at casual and fun Zus & Zo, a favorite hangout for expats. 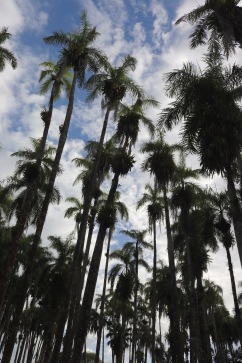 Girls dressed up for Indigenous Day 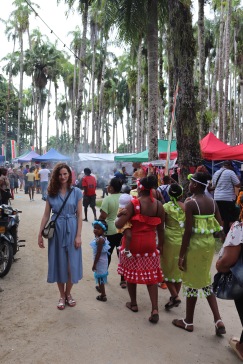 The wealth of Paramaribo was based on the sugar and coffee plantations in the Commewijne area to the east of the city. Although most of them are no longer in use, you can still visit some of these plantations, combining historical sightseeing with a pleasant stay in the middle of lush greenery. 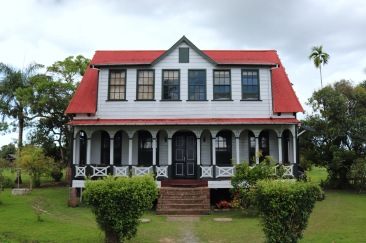 The nicest place to stay in the area is Frederiksdorp, an erstwhile plantation that has been turned into a small-scale resort. It has very charming guest rooms, both in the original plantation buildings and in newer cabins in natural surroundings nearby. There is plenty of bird life, and if you look carefully, you realize the ponds and ditches are filled with resident spectacled caiman. 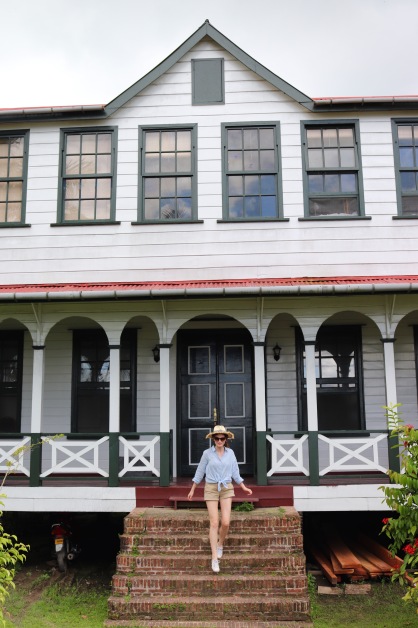 One of the pretty guest rooms

A spectacled caiman trying to hide

We opted for a 2-night package, a good deal as it includes transportation from Paramaribo and all meals (there are hardly any other eating options around, and none of them particularly appealing). Several activities are also included in the package, of which I especially enjoyed dolphin spotting from the boat. The little Guiana dolphins are usually to be found in the area where the Commewijne and the Suriname river join before going out to sea, and sure enough after half an hour or so we found them. We got a pretty good look at them but unfortunately they are rather hard to photograph! 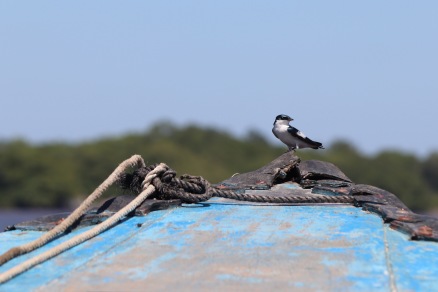 A passenger on our dolphin spotting boat

Guiana dolphins in the Suriname river, you never know where they will come up next so they’re almost impossible to photograph! 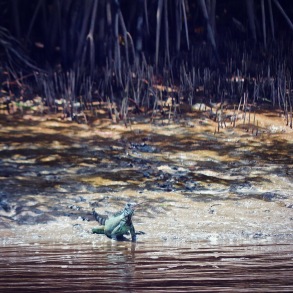 Iguana along the Commewijne river

Spectacled caiman just in front of our cabin in Frederiksdorp

You will also be taken on a short historical walk around the plantation, and it’s very interesting to get an idea about the place you’re staying. A guide shows you around some of the original wooden buildings, explaining the plantation’s history of slavery and indentured labor. It’s all too easy to forget the dark side of Suriname’s history when you’re in such a lovely place, so it’s good to be reminded.

Other activities include a “swamp” tour (the land previously used for the plantation that is now more or less flooded). This could have been very nice but unfortunately the tour leaves too early: it’s still very hot, birds and animals are not out and it’s not the nicest light. Caiman spotting tours on the other hand leave too late, when it’s already dark, and as mentioned before there’s plenty of caiman to see around the hotel grounds. If their schedule permits, try to push the swamp tour for as late as possible.

This used to be a sugar and coffee plantation

Bicycle tours to the nearby plantations of Rust en Werk and Mariënburg are also an option. But Frederiksdorp is also a great place to just relax, lazily watching birds and iguanas from the hammock in front of your cabin. There is a small pool, which looks very nice from a distance but is rather unimpressive up close… but refreshing nonetheless. The outdoor restaurant serves a selection of Javanese and international dishes, simple but well executed. 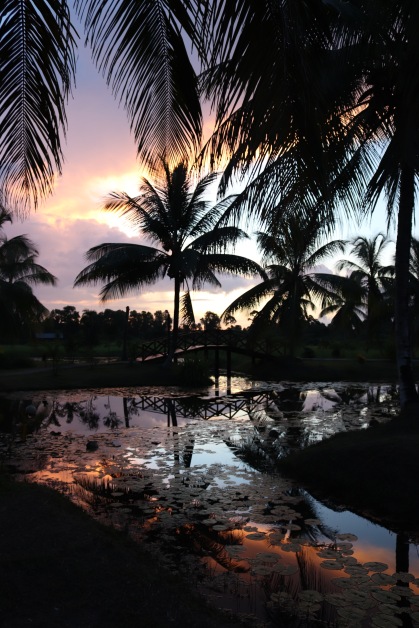 Relaxing in our cabin at Frederiksdorp

Day 5: to the jungle or to the beach?

After enjoying a last early morning walk along the Commewijne river, we were ready for our next adventure. For a small extra fee Frederiksdorp can organize a driver to bring you to the airport. From there you can go into the Surinamese jungle, but you can also, like us, combine a visit to Suriname with the incredible jungle and savannah of Guyana, Suriname’s northern neighbor. But if you’d rather go for some beach time, the Caribbean islands are just a short flight away! (Be careful, some flights leave from the small Zorg en Hoop Airport right in the center of Paramaribo, something we discovered just in time!)

Suriname is a very interesting destination and you can easily spend some more time here. Besides the inland jungle, in the right season (March to July) you can also go to Galibi to see giant sea turtles laying their eggs on the beach. But if you are traveling around the region and have plenty of other opportunities to see nature and wildlife, 5 days is just about enough to give you an idea of Suriname’s unique culture.

Walking around the plantation grounds

Have you been to Suriname, or are you planning on going? Is there anything missing from this itinerary? Please leave a comment and let me know what you think!